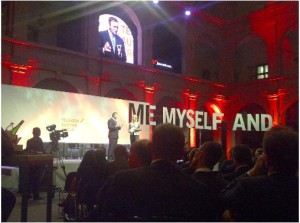 How does the internet shape my thinking?

For me, the internet`s influences on my thinking are threefold: It influences my information levels, my consumption and my actions.

Firstly, the internet influences what I am informed about: although the Internet offers endless sources of information, the kind of information it displays is different for everybody.

Not only does Google provide personalized query results for different users based on their previous online behavior (which queries were executed, where the user is located, which other websites were used and so on) which means that there is no unbiased, standard information available anymore on the world`s most powerful search engine. Also, online-newspapers (Huffington Post, NY Times, more to come) have begun to offer personalized landing pages for their users, shifting the “most democratic” medium newspaper to the most personalized one.

Secondly, the internet influences my consumption patterns by constantly showing me products that fit my pervious consumer behavior. This is not only about an Amazon recommendations list or any onlineshop`s newsletter. So called Adserve algorithms guarantee that whichever webpage I visit that features banners ads, it will display banners and online advertising of shops that I have used, products I seem to like or product categories I have shown an inclination for.

Lastly, and for me this is the most important aspect, the internet influences my ideas of relevance and therefore, in the long run, what I experience and communicate.

So how is it that the internet can influence my actions?

The internet influences not only things I perceive – trough it as a medium, but also the way I “scan” things/facts/experiences for their internet-value.

In times of social media, twitter, pinterest and user generated content the internet is no longer a channel by which we receive information, but also a way to transmit and publish information.

We twitter from a concert, skype at the workplace and whole different personas may be created on our picture-sharing-plattforms, blogs and social media accounts.

For instance, I write for an online magazine and communicate also via social media channels, so for me what is worth being experienced is very much influenced by what I want to publish through different channels.

The internet hence influences my ideas of relevance in everyday life. Constantly, I go through the world and stroll through the internet scanning everything I perceive for possible contents and its internet-worthiness.

Of course, this puts us into a dilemma: If everybody is sending, communicating and sharing their information in this “karaoke culture” as Malcom McLaren called it, who really receives our messages?

May we already be overflown by the information and communication, the content available, so that everybody is talking and nobody listening? Trapped in webs of one? And, even worse: completely preoccupied with our own little internet universe that keeps us supplied and entertained?

In the foreword to his renowned media studies classic “Amusing ourselves to death” Neil Postman argued nearly 30years ago that an unbalanced mix of information would do harm to the society. Although his critique was stirred by television consumption, not Internet usage patterns, we may learn a thing or two from his arguments.

Whereas in the first scenario, traditional human gatekeepers are the authorities which deprive a society from crucial information, in the second scenario machine algorithms programmed by our own leisurely information/entertainment behavior function as the new barriers that keep us from uncomfortable but important information.

This sounds like a doom scenario at the first glimpse, but it may not be that bad at all. Sure, a balanced and thoughtful supply of information is more difficult to achieve than ever – be it on user or on supply-side of the screen. But what we need now is not fear for our democratic internet going down the drain. What we need are thoughtful content providers which take from us the task to filter this overwhelming flow of content and communication in a responsible, balanced way. In the long run, leaving out what is unnecessary and getting across information and content that is relevant will be worth more for users than supplying them with communication channels and possibilities.